*Wide World of Sports premiered April 29, 1961 on ABC and aired as a regular anthology program until January 3, 1998.

*David Foster's Love Theme from St. Elmo's Fire won a Grammy for best Pop Instrumental Performance in 1985 and reached #15 on the Billboard Hot 100.

*Though some didn't like the ABC Sports yellow blazers, others, uh, didn't, either. That second link is Esquire's look at sports broadcasting "uniforms."

*Evel Knievel (1938-2007) was on Wide World 7 times officially, and this piece on ESPN credits him with 5 of the 20 top-rated episodes of the program.

*An unaired 1974 pilot with Sam Elliott as Evel is on YouTube. Second lead Gary Barton makes this comment under the clip:

Being the second star of this pilot, I think I would have been a lot richer today had it gone to series (it actually was picked up as a series but canceled because of people writing in afraid their kids would try and imitate Evil on their bikes. Canceled 2 weeks before shooting the first season.

*Evel's final TV special, Evel's Death Defiers, was intended as a pilot, but when Evel crashed in training, the show went off as a live broadcast with footage from that jump and, as intended, stunts from others. The broadcast, January 31, 1977 on CBS, was a huge flop even though it was co-hosted by Telly Savalas and Jill St. John!

Here is an interesting account of that special and the assault convinction and decline of Evel.

*Hanna-Barbera's Devlin aired 16 episodes on Saturday mornings on ABC in 1974.

*Team America debuted in Captain America in 1982, had its own Marvel comic for 12 issues, and later became Thunderriders.  Ideal Toys created Team America after dumping Evel. 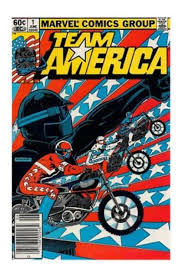