1) Scrooge McDuck: The star of this week's podcast subject, Duck Tales, deserves the #1 spot for his derring-do, his ducky pluck, and of course his massive wealth. No, our rankings aren't for sale...but we don't mind renting out a spot every now and then.

2) Donald Duck: Yes, that's right, Don gets the nod instead of the nephews! I still haven't accepted Huey, Louie, and Dewey, and that business with stealing Scrooge's dime in "Once Upon a Dime" (as we discuss on this week's pod) doesn't help any.

3) The Mary Tyler Moore Show: Chuckles Bites the Dust premiered this day 45 years ago! To make one more Duck Tales reference, Scrooge launched his empire in part with peanuts. Fortunately, none of those elephants mistook him for one.

4) Tony Franciosa: Happy birthday to one of the stars of our beloved Search! I can hear Cameron now: "Bianco! Biaaancoooo!"

5) Ed Asner: The 90-year-old was on the TV Confidential podcast again and was delightful as ever. Here's Ed talking about that famous MTM episode:

6) Count Chocula: In the middle of a frustrating shopping experience, I made an impulse buy of a giant box of the stuff yesterday, and I haven't regretted it one bit. Well, maybe a little bit.

7) Evel Knievel: No, we're not done with Evel yet! Here's yet another 1970s Evel-related ad. Even though it's for kids' bikes, I'm still disappointed it doesn't feature flaming hoops, spinouts, and crashes.

9) Hammer House of Horror: Decades ran a big batch of the 1980 British anthology series this weekend. Huh. I guess some holiday is coming up or something?

10) Christopher Hewitt: I didn't expect the future Mr. Belvedere to show up on an episode of one-season wonder On Our Own as I watched it on Prime Video, but there he was! His performance as a hammy actor in this episode makes his later work in his most famous role look minimalistic: 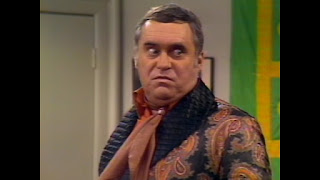