1) Dallas: This week we discuss the 1980-1981 TV season on the podcast, and the biggest deal of that season was the prime-time soap that was red hot with the "Who Shot J.R.?" storyline. SPOILERS BELOW!

2) Over Easy: Admit it: After listening to our show this week, you are a little deflated this series wasn't about eggs, aren't you?

3) Mac Davis: R.I.P. to the songwriter/performer.

4) The Halloween That Almost Wasn't: Our friends at 20th Century Pop discussed this Halloween special on their show this week.  Was it the nadir of Judd Hirsch's career? You decide!

5) Thundarr the Barbarian: The cartoon series debuted on this day in 1980 with all kinds of gore, scantily clad women, and of course Max Von Sydow. Wait, being told that was CONAN the Barbarian...but the cartoon had some of that, right?

6) Cheers: Do we ever need an "excuse" to put Cheers on the list? I think not.  This week, Decades has its Weekend Binge showcase the Batty-winning classic, and also, Ken Levine's excellent podcast features a first-person account of the premiere of the show.

7) Misfits of Science: The series premiered this day 35 years ago, and Toy Galaxy posted an amusing history of it this week. Here's the opening of the series:

8) Shogun: The biggest event of the early part of the 1980 season was the rollout of Shogun, which dominated an entire week in mid September: 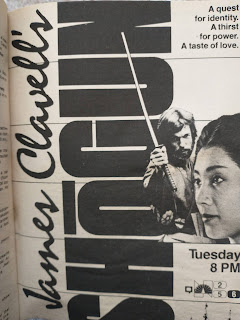 9) Clifton Davis: The star of That's My Mama (and many other productions) turns 75 today!