Murder, She Wrote Monday continues with one of the best titles (if not episodes) I have seen yet in the series: "Corned Beef and Carnage." It feels like it should be a book in one of those endless cozy mystery series that show up on Amazon's Kindle Deal of the Day--you know, like Book 8 of The Katzman Deli Mysteries. 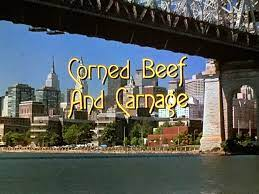 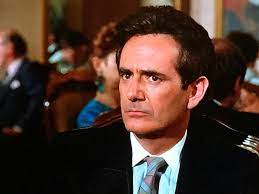 In fact it is another third-season installment of Murder, She Wrote, and the guest cast is impressive: Susan Anton, Warren Berlinger, David Ogden Stiers, Genie Francis, Bill Macy, Ken Swofford, and Marcia Wallace. best of all is Richard Kline as a smarmy (shocker, huh?) ad exec. Oh, and Jeff Conaway and Genie Francis return as aspiring actor Howard Griffin and Fletcher niece Victoria Brandon, a couple we met all the way back in the first season's second episode. Of course the niece is implicated in murder!

The great news is this episode delivers, easily the best so far in season 3. One of the highlights is a performer not in that guest roster above: James Sloyan as Lt. Spoletti. In this New York City episode, we get one of my favorite "authority figure" characters. Of course whenever she encounters murder in the big city, Jessica usually encounters incompetent boobs who relish her help or condescending know-it-alls who resent it. I think we should add a third category: People who start out as know-it-alls but soften and work with her. Spoletti is perpetually exasperated and fun to watch. 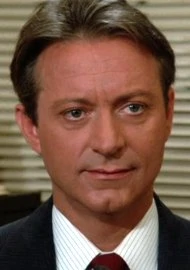 At one point, he says out loud, "Why is it that I always feel tall blondes are lying to me?" Jessica replies without hesitation, "Adolescent trauma, Lieutenant. But about the..." and goes right into a spiel about some clue. It's one of many LOL moments in the episode.

It's a knockout episode with a great speech by the murderer. It falls right on the borderline of cheesy and--Aw, who am I kidding. It's cheesy and awesome. Kline has never been oilier. Add this to your season 3 watchlist, folks!