This Day in TV History: Remington Steele premieres on NBC

40 years ago tonight, NBC ended its Friday with the premiere of a new light detective comedy, Remington Steele.

This is a show that hasn't really come up on the podcast yet, and now that I think about it, it's mostly missing in action nowadays. Despite lasting 5 seasons (4 of them, really, plus a fifth of movies) and 90-some episodes, it hasn't resurfaced much lately. The series came out on DVD long ago but is now out of print. Me-TV has shown it sporadically.

To my knowledge, it has never been on an official streaming service, and it looks like it missed its window to be added with other 20th Century Fox shows on Hulu. if Hulu were still in the business of adding such shows instead of dropping them (like The Fall Guy), this would be a great candidate. Maybe Tubi could resurrect it someday. 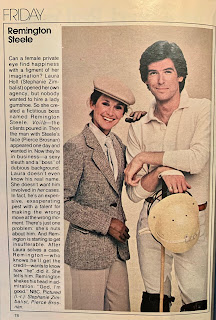 Email ThisBlogThis!Share to TwitterShare to FacebookShare to Pinterest
Labels: Remington Steele, This Day in TV History