1) Angela Lansbury: Rest in peace, Angela Lansbury! I will have more to say tomorrow, but what a career, and what a loss for the entertainment world. It's amazing that she was nominated 12 straight times for Murder, She Wrote Emmys yet never won. She was a BGOT due to her Season 7 batty for Outstanding Lead Actress.

2) Byron Allen: Recently the entertainer-turned-mogul made history with the most expensive home purchase by a Black person in the United States. In other news, Skip Stephenson got that creaky screen door on his back porch fixed!*

3) Department Store Day: It seems like there is one of these every month, but, hey, I don't mind posting an old Hills commercial.

4) Hotline: This Lynda Carter TV movie debuted on this night in 1982 on CBS, and it looks like a thriller! 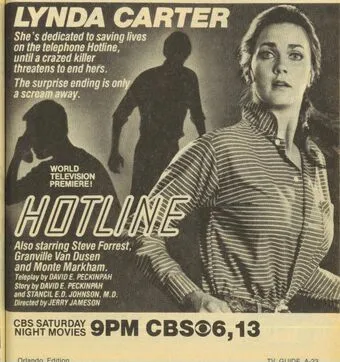 6) Shaping Up: In yesterday's post, we included a video of ABC promos that included this short-lived ABC sitcom. I can't be the only one who wants to see more of this:

7) Tim McCarver: Happy birthday to someone who somehow went from being one of the most beloved baseball broadcasters to one of the most resented when he went national. I loved him on Mets games in the Eighties.

8) Mr. T: 40 years ago tonight, T guested on a seminal Silver Spoons, and you can hear more about that right here!

9) Suzanne Somers: Happy birthday to the star of She's the Sheriff!

*Note: I realize Skip Stephenson has been gone for 30 years.