This Day in TV History: St. Elsewhere premieres on NBC 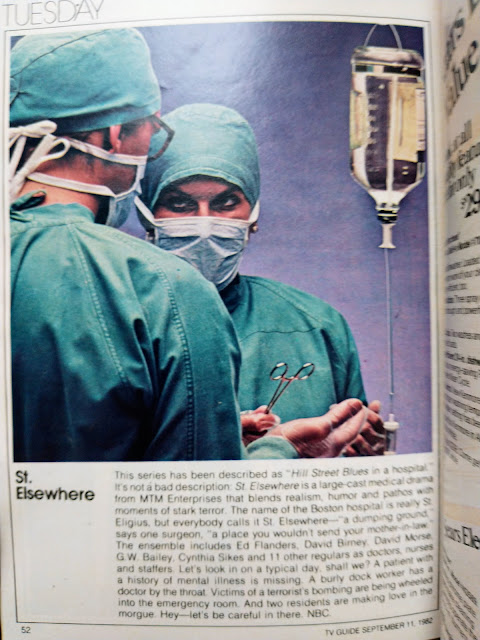 We talked about the series in depth on the podcast. It never was a big ratings getter, rising from terrible to middle-of-the-pack ratings, but it was a big critical success, earning 13 Emmys, placing on multiple lists of the best TV shows of all time, and even getting a Genius Award for Ed Flanders as Dr. Westphall (It had the misfortune of being in our sixth season along with Batty buzzsaw Cheers).
That pic above is from TV Guide's 1982 Fall Preview issue, which also highlights the series in its Editor's Choice column:
We saw only a 10-minute sample of scenes from NBC's St. Elsewhere, but that and five excellent scripts were enough to raise hopes that this series may do for hospital drama what Hill Street Blues does for the inner-city police precinct--which is to offer a richly drawn entertainment that's about as good as television gets.
Note that the mag made that Hill Street comparison in the close-up page, too.
The promo below includes another series that debuted on this night but did not stick around: Robert Urich's Gavilan.
Posted by Rick Brooks at 6:00 AM

Email ThisBlogThis!Share to TwitterShare to FacebookShare to Pinterest
Labels: St. Elsewhere, This Day in TV History