Further Viewing: You try to watch ONE pleasant episode of Little House...

Laurie and I decided to watch a Little House on the Prairie episode the other night and, being in the mood for something light, I chose "Castoffs," the opener of the fourth season and first appearance of Jonathan Garvey, the character played by NFL Hall of Famer Merlin Olsen as sort of a less-crude replacement for Victor French's Isiah Edwards after French departed the series.
Garvey is a light character, and surely his introduction to Walnut Grove must be amusing, right? Welllll...
On one hand, there is a light touch in "Castoffs." An eccentric old woman (Hermione Baddely, fresh from Maude and destined to return herself in a couple more LHOPs) is living in the frame of a house, and the town ponders whether to "allow" her into their church each Sunday. 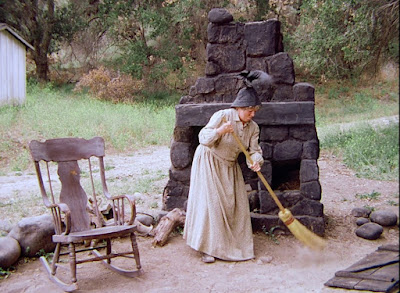 The adults think she's nuts, but the kids embrace her, and Laura advises Garvey to seek her out for the crick in his back.
Wait, who? Yes, Garvey has no big introduction. He just IS. I guess he's been there all the time. Well, that would be well enough, though personally I think if you get Merlin, you build the whole episode around him. He does show some personality, like an inclination to rely on "medicine" to cure his back pain, but it's not his episode. 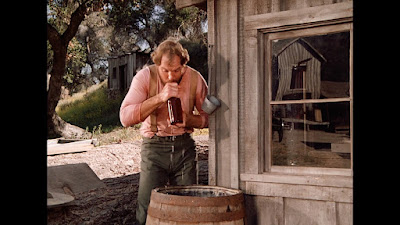 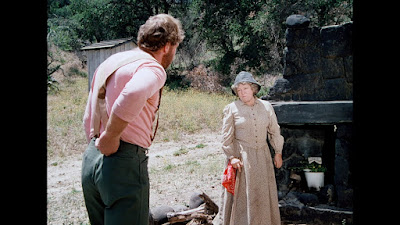 The issue here is that something far more momentous and far less humorous happens in this episode--early on, in fact. SPOILERS AHEAD...
You see, Laura is in a state of trauma for much of "Castoffs" because her dog dies! Beloved pooch Jack shuffles off this mortal coil early on, and while we don't see him literally dying, we DO have to observe Charles coming in, checking him out, taking a pulse and doing an autopsy (OK, I am exaggerating, but it feels a little drawn out) and confirming the poor creature is dead. Shirtless, I might add. 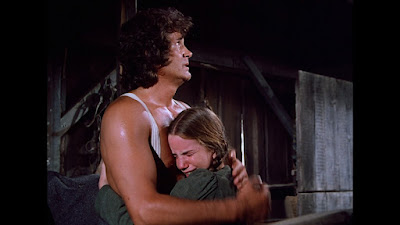 But that's not all! It's even sadder that it appears--and the death of a pet who is a regular on the series is pretty sad--because the day before, Jack was trying to get Laura to play with him, but she brushed him off. So we have the double whammy of a departed family member and the crippling guilt a survivor must endure.
But let's not complicate this. THE DOG DIED! We prepared to see how Merlin Olsen got his start on LHOP, and, WHAM, because it's Walnut grove and every moment of potential joy must be balanced by crushing despair, we see a pet death.
Here is the description of the episode on the Peacock site. Just for fun of the light, non-dog-dying variety, see if you can tell what is not included:
Only Walnut Grove's children welcome an old wanderer.
I don't see any mention of Jack dying!
It's an entertaining episode with warmth and valuable life lessons, and I doubt I'm really giving much away by saying Laura winds up finding some happiness with a stray dog who just happens to be roaming around after Jack's passing. There is even a comedy bit with Mr. Oleson (not to be confused with Mr. Merlin Olsen) getting inebriated by the water that has been tainted with Garvey's "medicine." 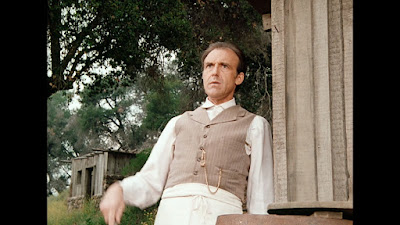 But, Heavens to Reverend Alden, I was not expecting what I got in "Castoffs." The life lesson WE learned was, never, ever expect to get away from Walnut Grove without some kind of depressing or downright devastating traumatic incident.
In the interest of doing what Landon does in this episode and bringing everyone back up to a high note and a happier level, check out the great juxtaposition of two temperamentally opposite characters in this shot, though, and kudos to director Michael Landon: 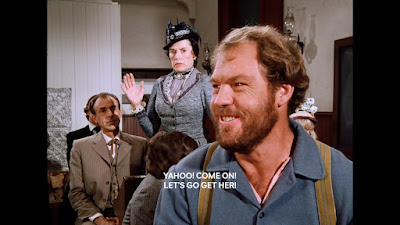 Email ThisBlogThis!Share to TwitterShare to FacebookShare to Pinterest
Labels: Further Viewing, Little House on the Prairie