1) MASH: Many are celebrating the 50th anniversary of the classic sitcom this week, and Me-TV is showing the episode we discussed, "Tuttle," today at 12:30 EST. 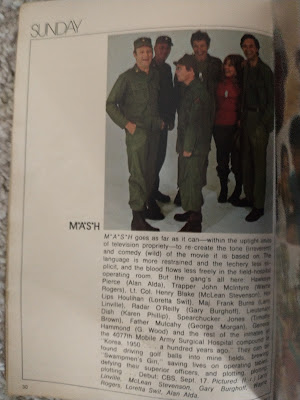 2) Anna and the King: Yesterday, though, we talked about the other sitcom CBS premiered 50 years ago yesterday. Just think, between the two of them, those shows won 14 Emmys!
3) Batman: This is also the weekend marking Batman Day, so consider this a reminder to be a good citizen and be careful on your skateboard. Batman would want it that way.
4) Emmy winners: Congrats to Michael Keaton, Jean Smart, Sheryl Lee Ralph, and the others.
5) National Cheeseburger Day: Sounds good to me! How about a nice, quick, juicy microwave burger?
6) Gus: 45 years ago tonight, the Disney program on NBC aired Gus, the Pigskin Mule. Life was much different a mere 5 years later, and the weekly Disney program was now on CBS. So 40 years ago tonight, the Disney program on CBS aired...part 2 of Gus, the Pigskin Mule. This clip below teases a 1979 showing of the movie!
7) The U.S. Air Force: Happy birthday to the USAF!
Do you think they are ticked off that Top Gun is about Navy pilots?
8) Holly Robinson: Happy birthday!
Do you think she's ticked off that Top Gun is about Navy pilots?
9) The Equalizer: The original version of the show premiered on this day in 1985.
10) The Battys: Batty talk will continue here on the site this week as we build up to the Season 10 awards show! Last season's big winner: The Rockford Files.
Posted by Rick Brooks at 8:00 AM