This Day in TV History: A new beginning for Little House

40 years ago tonight, NBC took Little House in a new direction--nay, a new beginning, if you will.

Michael Lando stepped aside from his on-screen role for this ninth season, and the show became a Laura/Almonzo series. It didn't sustain the Little House ratings, and the show would end with a series of movies bringing back the rest of the family.

Here's a note from the 1982 TV Guide Fall Preview about the changes: 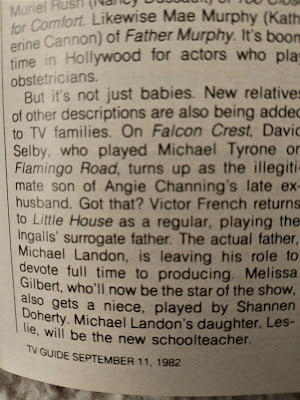 Email ThisBlogThis!Share to TwitterShare to FacebookShare to Pinterest
Labels: Little House on the Prairie, This Day in TV History