This Day in TV History: 50 years ago, a new comedy premieres on CBS!

Ok, yes, MASH debuted on CBS on September 17, 1972, but lots of people are talking about that show this week (And we talked about it here). How about some love for the other new program on CBS that Sunday evening 50 years ago: Anna and the King?
Based on the book/movie/Broadway musical, this incarnation of the story actually gets Yul Brynner in the title role. The King, that is. Samantha Eggar is Anna.
There are a few MASH connections pointed out by Harry and Wally's Favorite TV Shows: The two sitcoms share producer Gene Reynolds, and Brynner's daughter Serena is played here by Rosalind Chao, who later played Soon-Lee Klinger on the classic Korean War sitcom and its unclassic spinoff AfterMASH. By the way, harry and Wally say, "Compared to the hit movie, this TV version is pretty lame." It was gone after 13 episodes.
Here is what the 1972 Fall Preview of TV Guide says about the show: 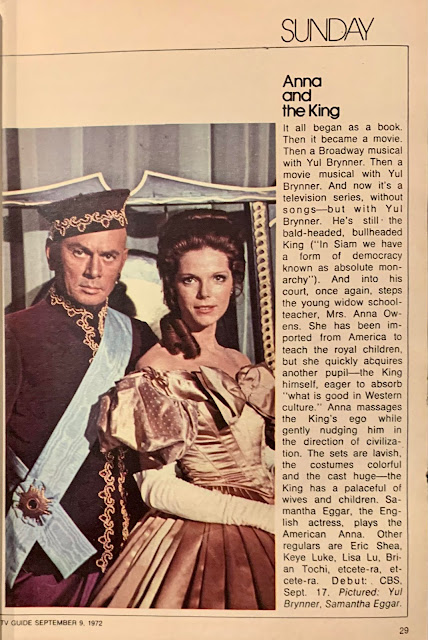 Email ThisBlogThis!Share to TwitterShare to FacebookShare to Pinterest
Labels: Anna and the King, This Day in TV History