1) 8 Billion: The world's population has topped 8 bil!
This says to me we have some room to grow the podcast.
2) Michael J. Fox: The beloved Family Ties star received an honorary Oscar from the Academy this weekend. There is no truth to the rumor that Tom Hanks came onstage and slapped him, thinking it was his bottle of vanilla extract.
3) Rudolph cereal: I couldn't resist getting a box of this last week. It delivers! 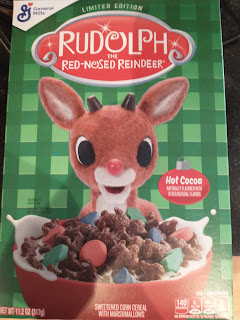 4) Drew Barrymore: The then-7-year-old hosted Saturday Night Live 40 years ago tonight. Half the cast and staff said, "OK, we give up, we can't keep up with the host this week," and went to bed early each night.
5) National Toy Hall of Fame: The Hall welcomed three new entrants: The top, Masters of the Universe, and Lite-Brite.
6) Soap: Get ready for Antenna TV's upcoming Wednesday-Friday Thanksgiving marathon of Soap (Hey, why not?) by listening to our episode from Season 7.
7) Hear No Evil: This CBS movie premiered 40 years ago tonight and starred Gil Gerard as a cop who has gone deaf and must track down an evil motorcycle gang (who set up the explosion that cost him his hearing) with his partner Bernie Casey. Gerard's character's name? BILL DRAGON!
8) National Absurdity Day: I was trying to think of a wacky BOTNS-era TV personality that most captured the feeling of absurdity, and of course I came up with it: Economist Jerome Smith on Tomorrow with Tom Snyder.
9) Neighbours: FreeVee is resurrecting the long-running Australian soap opera.
10) R.I.P. John Aniston and Robert Clary:
Posted by Rick Brooks at 6:00 AM