In 1976, Superman: The Movie was not yet a thing and the superhero explosion on TV hadn't occurred.  The Wonder Woman pilot movie ran in Fall 1975, and a few episodes debuted in early 1976, but The Incredible Hulk, The Amazing Spider-Man, and the TV movies we have discussed here were still in the future. it must have been exciting, then, to see news of comic books on TV...or even comic book creators on TV. Check this item from the Marvel Bullpen Bulletins feature in the Captain America and the Falcon cover-dated May 1976 but obviously written months earlier: 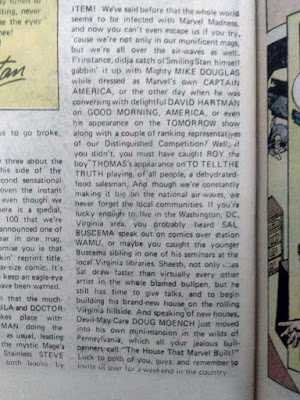 Stan Lee on The Mike Douglas Show and Good Morning, America AND Tomorrow sounds pretty cool (love the reference to the Distinguished Competition), and how about Rascally Roy Thomas on To Tell the Truth? Stan was out there hustling, wasn't he?  Soon superheroes, not just their creators, would be all over the small screen.


To Tell the Truth was a mainstay for years, dating back to its prime-time run on CBS beginning in 1956 but this would have been the second incarnation. From 1969 to 1978, the series, then hosted by Garry Moore, was in first-run syndication.  Thomas likely appeared with Moore, but at the end of that run, the ailing Moore was replaced by Bill Cullen and Joe Garagiola.

As for Tomorrow, according to Phil Gries' Archival Television Audio site (where you can buy an audio copy of the program), the program aired November 20, 1975:

Host Tom Snyder's guests are Stan Lee publisher of Marvel Comics, Carmine Infantio publisher of Superman Comics and Julius Schwartz editor who is spearheading the revival of comic books' "golden age" in this topic of "Comic Strips and Comic Books".