Way after dark, that is! After our look last week at the TV of June 27, 1975, it's time to go beyond prime time, and let me tell you, this is where things really get interesting.  In prime time, summer was getting in gear with a lineup filled with reruns.  After prime time, we get plenty of reruns--but cool ones! And movies! And--well, let's just get to it.

Source for this piece is an contemporaneous New Hampshire edition of TV Guide.  This edition includes some big BAH-ston channels as well as the local Granite State fare. It sure looks to me like the viewers in the region had some quality channels.  Ah, the days before infomercials! Even though programming essentially ceases at about 4:00 A.M. (If a station broadcasts but TV Guide doesn't list it, does it really broadcast?), the late/overnight schedule here is packed with great stuff. 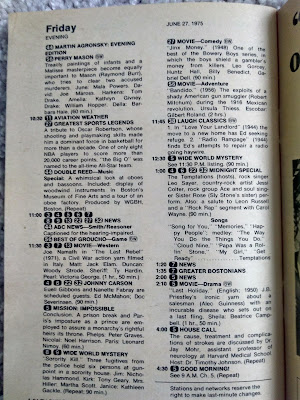 It's great to see a Greatest Sports Legends here, and this tribute to the Big O sounds like a good one.  I said on our GSL episode that I always thought of it as a weekend afternoon kind of program, but here it is at 10:30 on a Friday night.

Channel 56 has a lot of good stuff, and here we see a Perry Mason, a Best of Groucho (AKA You Bet Your Life), and a Mitchum flick to end the workweek.

Check out the battle at 11:30, where NBC of course has Carson, then still 90 minutes and with a new episode. CBS runs The Last Rebel, which may be the best Joe Namath/Jack Elam Western ever made.  ABC has Wide World of Mystery. It's a far cry from the "Late Night Wars" of the modern era, with every network offering a talk/comedy show or two.

Channel 27, a Manchester independent, follows GSL and local news with a Bowery Boys movie!  That's it as far as TV Guide is concerned, but 27 did run Jack Benny earlier (and also something called Elder American at 8:00).

Let's skip ahead for a moment to 1:00, when NBC follows The Tonight Show with The Midnight Special. Who says NBC wasn't hip? Keep in mind this is several months before the premiere of Saturday Night! Can't go wrong with the Temps (the rest of the lineup, I admit, doesn't seem as groovy), but what is up with "a 'Rock Rap' segment with Carol Wayne?"

I think my new favorite channel is retroactively channel 38 WSBK Boston), now sadly a MyTV affiliate but a great indie station back in the day.  According to this issue, Laugh Classics is a nightly program. Earlier episodes this week spotlighted Leon Errol and Edgar Kennedy, who shows up again in tonight's pair of comedy shorts.

Channel 5 looks decent, too, with Mission Impossible and an Ealing classic with Alec Guiness. These rebels are running MI before Wide World of Mystery for some reason!

Two final notes: Shout-out to the ABC News on channel 44 for airing with captions.  We here at BOTNS are strong advocates of closed captioning! It's too bad that this captioned showing is the auxiliary one on a PBS station instead of the "main" one earlier in the evening1

Finally, the Crack Research Team at BOTNS assures me that the doctor in residence on House Call is not that Jay Mohr.  I don't think I'd feel comfortable getting stroke advice from the other one.