On this day 50 years ago, ABC ran Mister Jerico at 9:00 EST following a Mod Squad rerun.  Jerico, according to Wikipedia, was released theatrically in the United Kingdom despite being made for TV. In fact, ABC had already aired this same movie a mere 5 months ago. 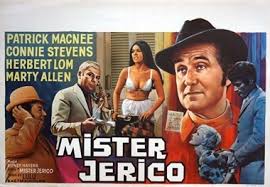 This great write-up of the movie says it was a failed pilot. I guess ABC was really getting as much mileage as it could, burning off another screening here in the middle of summer.

Check out the movie's swinging theme song by Lulu!