One thing I enjoy looking at in old TV Guides is the reruns. It's no surprise that the likes of Star Trek, I Love Lucy, Bonanza, and Hogan's Heroes show up a lot in the Boston-area listings in the June 22-28, 1975 edition. After all, those shows are still syndication mainstays 45 years later.

But what about the series that were popular then but are harder to find now?  Keep in mind this is just one week and one area, but it still interests me to see some of the series rerunning at the time.

The one that stands out most is The F.B.I., which was on weekdays late afternoon/early evenings on two different channels (each showing a different episode). The Quinn Martin drama aired a whopping seasons and well over 200 episodes, yet F.B.I. is mostly M.I.A. in 2020.  Warner Archive Instant was showing it, and the whole show is on DVD, but how many places have run it this century other than the departed American Life Network? 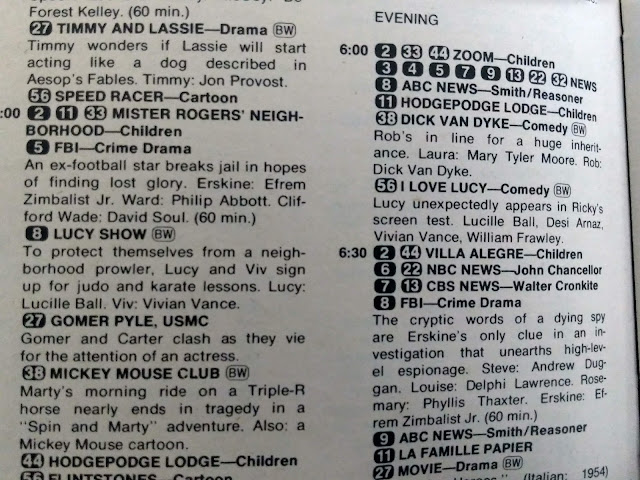 Ironside is often shown on COZI, and Shout! has released much of it on DVD, but I think it's highest-profile stint in recent years is Kill Bill appropriating its theme song. I think the 2013 Blair Underwood remake actually lowered the profile of the original. In 1975, though, again, it was on twice a day.

it should go without saying that The Jack Benny Show, no matter how many times it may be showing around the country (JLTV still has it), isn't on as much as it should be. It's no shock that so many of the black-and-white classics like Ozzie and Harriet are in the 1975 listings but not around as much now.

It's cool to see some more "recent" shows like Room 222 and Secret Agent (AKA Danger Man) in reruns in this Guide. While it's no shock that we can see Batman, Bewitched, and I Dream of Jeannie, I think the biggest surprise to me is an oldie that aired each day at 5:30 P.M.: Robin Hood. Has anyone seen that show in the 21st century outside of dollar DVDs and super-low-budget stations that need cheap vintage programming? This isn't meant as a critique; on the contrary, I think it's great that in '75 the Richard Greene British show had a regular spot on the dial. 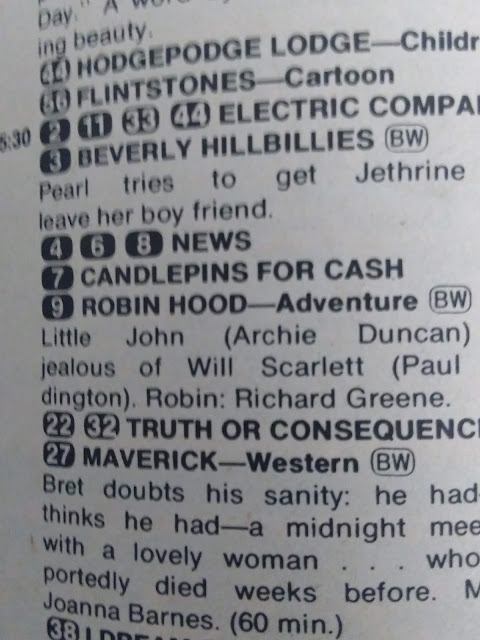 In another 45 years, what shows from the 50s and 60s will still be in the public eye?

Email ThisBlogThis!Share to TwitterShare to FacebookShare to Pinterest
Labels: Inside the Guide