Welcome to a new feature here on the site, "Inside the Guide," in which we explore a vintage edition of TV Guide from the BOTNS archives.  Let's look at a cartoon that aired on WSBK 38 (Boston) according to the June 22-28 1975 edition of the mag: 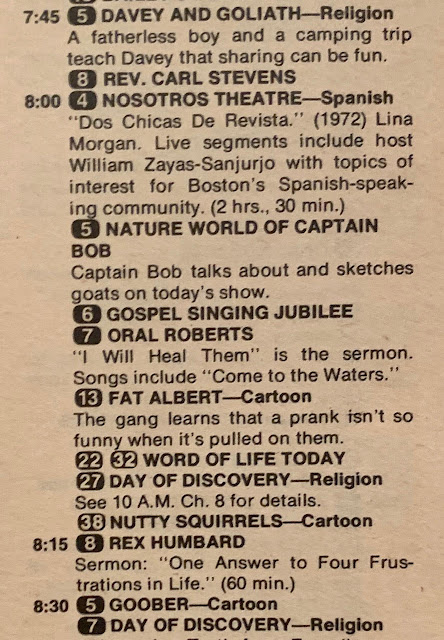 As you may have guessed from all the religious programming, this listing is actually from Sunday morning, not Saturday.  It still has cartoons, though!
(Any interest in an episode about Nature World of Captain Bob?)

I confess I had no idea about Nutty Squirrels, and I have watched a lot of TV and a lot of cartoons.  Turns out they are a Chipmunks ripoff, only jazzier, using the sped-up-vocals gimmick to create music.


What's interesting to me is they actually beat Alvin and the Chipmunks to television, debuting in 1960 in first-run syndication with The Nutty Squirrels Present. The characters served as hosts for an anthology of European-made (intended for theaters) cartoons that distributor Transfilm bought and redubbed, then added bumpers for:


Unfortunately, that intro is almost all I can find from the Squirrels TV program.  This cartoon from the series is the only one I can see on YT:


The Alvin Show, apparently inspired by this show, premiered on CBS in Fall 1961.

Anyone remember The Nutty Squirrels Present?  I don't think reruns of the program made it to my area when I was growing up.

For more on this rarity, check out this excellent article by Tralfaz, which is my primary source for this post!  The author writes: Someone still had ownership of the squirrels cartoons in 1975 because they aired on WSBK-TV in Boston in a half hour slot between Popeye and Wally Gator. When the squirrels were last seen on the small screen is your guess.

(NOTE: We are retconning a few recent posts that looked at this same issue, so this is technically not #1, but #3 in this ongoing series!)