This Day in TV History: Christmas in August on NBC

Where do you stand on Christmas episodes running out of season? Personally, I like everything shown in order in syndication, yet I might skip over a Yuletide installment if I'm watching a series on video or in streaming.

NBC didn't mind having "Christmas in August" 40 years ago today, and I bet they even ran a promo touting it with a Casey Kasem voice-over hyping "Christmas Watch," a rerun of CHIPS. 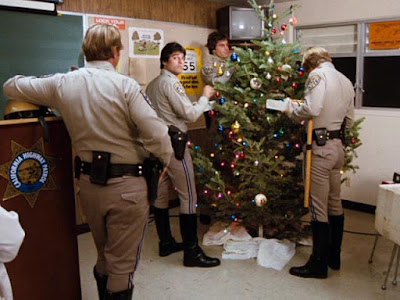 Then again, that episode stood out as the only such rerun on that night. Bookending it were part 1 of "The Omega Connection" on The Wonderful World of Disney and another encore presentation of part something of the miniseries From Here to Eternity.

Perhaps NBC thought people would enjoy revisiting the CHIPS and getting some Christmas cheer.  Perhaps they had another holiday episode of the series in the works and figured they might as well rerun this one now.

Or maybe they just didn't care. After all, 1980 was a pretty rough year for NBC.  Anyway, Merry Christmas, everyone!
Posted by Rick Brooks at 6:00 AM

Email ThisBlogThis!Share to TwitterShare to FacebookShare to Pinterest
Labels: Chips, Christmas, This Day in TV History