1) Ted Danson: What a week for the TV Icon and Batty winner: He scored an Emmy nomination and then was the subject of our YouTube Spotlight yesterday!

2) The Mouseketeers at Walt Disney World: This 1977 Wonderful World of Disney episode may not be the highest-profile addition on Disney Plus this summer, but it should be. You get a great look at the theme park in its youth, plus a wacky (and sometimes, let's face it, appalling) variety special featuring the then-Mousekeeters, headed by Lisa Whelchel.  Al this plus Jo Anne Worley and Ronnie Schell AND original commercials? And let's not even talk about the Pooh Polka. Seriously, let's not.

You can't tell me this didn't drive more subs than did Hamilton. OK, you can tell me, but I won't listen.

3) The Odd Couple: Decades celebrates the sitcom this weekend with a marathon. It started in 1970, it is one of my favorites, it is on DVD...Hey, we oughta talk about it on the podcast sometime!

4) NBC's free app:  I give props to NBC for not pulling all of its programming off this and moving it to Peacock...yet.  Buck Rogers, Punky Brewster, The Equalizer...all are still free (with ads, natch) on here.  Unlike Peacock, it's on Roku and Amazon, too.

5) Coloring Book Day: Celebrate by getting Horseshack's scarf just so: 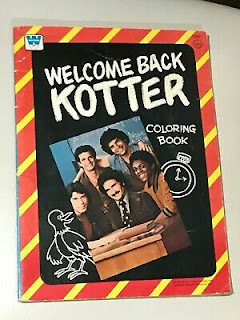 6) Mark-Paul Go--Uh, the guy who played Zack Morris: His new podcast, Zack to the Future, finds the star watching the original series one episode at a time--and I did not write rewatch because he never saw an episode until now! The first episode indicates a fun spirit about the whole thing.  Finally, here's your excuse to do that Saved by the Bell rewatch you have been delaying!

7) Carroll O'Connor: The late actor's birthday is today, and, yeah, he had a rich career with many roles, but I am still fighting the urge to call someone a meathead.

8) Sisters Day: Who should we celebrate on this special day? How about Pinky and Leather Tuscadero? Whoa! (picture from The Retroist) 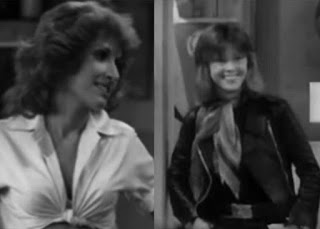 9) 25,000 Pyramid: On TV Confidential with Ed Robertson, Ilene Graff mentioned that you really had to work to get on Pyramid.  If you passed that test (yes, a test!), other shows would line up to get you because they knew you were good.

10) Michael Douglas: Congratulations to the star of The Streets of San Francisco for his Emmy nomination.