One of my favorite performers of the early days of television is Don DeFore. Smooth and professional, he was a perfect foil for the titular Hazel and an enjoyable regular as Ozzie (of Ozzie and Harriet, natch) Nelson's neighbor Thorny. He even seemed polished in grittier work like movies Too Late for Tears and Southside 1-1000.

It was a big pleasant surprise to see him pop up in "Unfinished Business," a Murder, She Wrote that debuted October 12, 1986. For one thing, I don't remember him being in much at all post-Hazel, let alone 15 years after the fact. For another, his resort proprietor is kind of unkempt. Disheveled Don DeFore is not a frequent presence in my TV memory! 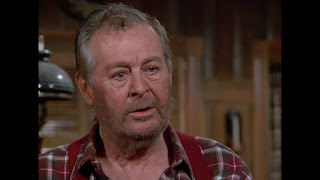 Just by existing in this one, he steals the whole thing from an impressive roster of character actors. Pat Hingle is prickly as a retired lawman trying to solve an old case, J.D. Cannon is the local lawman who gets involved when a new murder occurs at the lakeside cabin resort DeFore owns, and Lloyd Bochner is a doctor who may be involved somehow. All this plus Erin Moran and Hayley Mills!

What interests me is that, speaking of "that guys," series regular William Windom gets a little bit of a showcase for his Seth character.  Dr. Seth is of course Jessica's "close personal friend," and she works to clear him on some serious charges at this declining resort--but what secrets is Seth hiding? I like seeing Windom have a bit more to do than make sarcastic (yet genteel) comments about the idiots in Cabot Cove.

The woodsy setting is a nice change of pace, and the performances are fun, but the story is lacking.  The resolution is a real head scratcher that doesn't bring a satisfaction closure to everything. The plot is credited to longtime scribe Jackson Gillis, who knows what he's doing, but we had to try to cobble together an explanation that made some kind of sense. Maybe some key scenes were excised in post production.

But, hey, Don DeFore with stubble! Turns out this is his next-to-last role, followed only by an appearance on St. Elsewhere in 1987. I never expected to see him on Murder, and it points out the real joy of the show: the surprise of seeing who turns up each week.

Viewers in 1986 may have thrilled to a Tom Bosley/Erin Moran reunion. It's interesting to see Sheriff Tupper out of his jurisdiction, another nice change of pace.  I still think this episode could have been much better, but this was one where the guest cast carried the program and made it a solid outing.