1) It Takes Two: Thanks to one of the new members of our Facebook group, Trevor, for posting a link to the first epsiode of this short-lived Richard Crenna/patty Duke sitcom. it's worth a look if only for this theme song by BOTNS fave Paul Williams and Crystal Gayle!

2) Nipsey Russell: It's National Poetry Month, everyone! In my opinion, we haven't really had a decent poet laureate since Nipsey and maybe Leaping Lanny Poffo:

3) Fred Astaire: The AFI tribute special to the legend aired on this day in 1981.

4) WrestleRock Rumble: Because another of our Facebook group friends, Geno, mentioned this last week, and I never want to miss an excuse--uh, chance--to post this. Talk about POETRY!

5) Diana!: On April 18 1971, Diana Ross starred in her own special to promote a new solo album. along with guests Danny Thomas, The Jackson 5, and Bill Cosby. It's reportedly the first time Jacko, who did a Sinatra impersonation, performed solo on television.

6) Lineman Appreciation Day: Props to all the linemen out there:

7) Check It Out!: Not only is this show the talk of our group (Well, OK, I tried to make it happen, but would you believe it missed it by that much?), but the first season is on Pluto TV. This has to have one of the worst theme songs ever, a "try hard" attempt at 1980s-style rap that, unfortunately, sets the tone for the show:

8) Martin Short: He's a national treasure, I tell you--not my nation, but so what? Enjoy this clip the Carson estate posted this week:

9) National Columnists Day: We can't let this day go by without posting a pic of the great DVP as Thomas Bradford of the Sacramento Register! 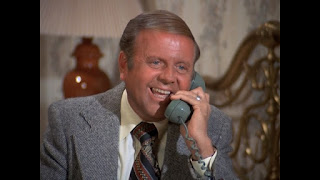