Today we take another look at TV 40 years ago via the TV Guide from the Dallas/Fort Worth area for that week. Let's go back to Friday, April 3, 1981, and see what was happening.

What better way to start this post--nay, the weekend--than with a hilarious hour of comedy? 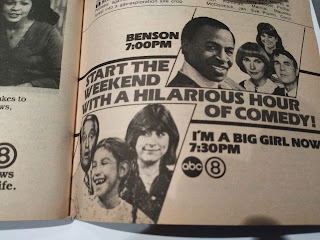 ABC followed that with 1979 TV movie Vampire. In her weekly look at TV movies in this issue, Judith Crist refers to the production's "only distinction--beyond wasted talents--being that Richard Lynch's handsome vampire is a blond hailing from Hungary instead of a brunet from Transylvania."

CBS was the big dog on Fridays in 1981, and on this night it had new episodes of The Incredible Hulk, The Dukes of Hazzard, and of course Dallas.

Here's an interesting "Remember this was 1981" note: At 11:00 Central time, so midnight on the East coast, CBS was scheduled to air an NBA Western Conference playoff game! Well, at least it wasn't tape delayed. Looking back at the schedule, this must have been either the Rockets and the Lakers or the Suns and the Kansas City Kings.

ABC had an episode of Fridays with Father Guido Sarducci and Jefferson Starship, and on NBC late night, Skip Stephenson and Byron Allen hosted a Midnight Special with guests CCR and Waylon Jennings, plus for some reason a look at ABC series Vega$. A little earlier on channel 11, viewers at 10:00 got a chance to see one of the most famous TV episodes of all time: 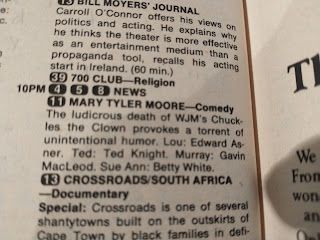