With the aid of the same TV Guide we used in this week's bonus episode, let's look at what happened on the airwaves 40 years ago today--Thursday, April 2, 1981:

Perhaps the biggest event is the premiere of a short-lived but acclaimed TV show that has come up on the podcast several times. It's Michael Lerner--wait, no, it's Michael Learned--in the debut of Nurse: 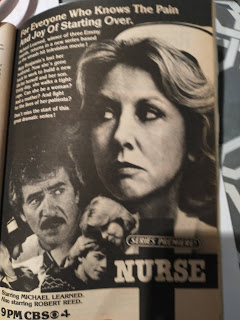 The only NBC program to get a display ad is My Father, the Circus King, a special showcasing famed tiger trainer Gunther Gebel-Williams of the Ringling Brothers Barnum & Bailey circus.  The documentary is through the eyes of his son, and the special is under NBC's Project Peacock banner promoting specials aimed at young audiences. 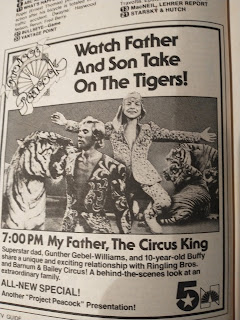 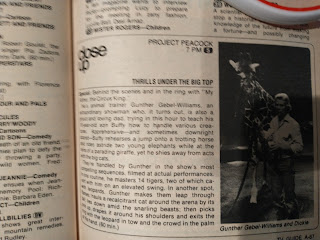 On ABC, there's a new look to Thursday night's lineup, as this ad tells us: 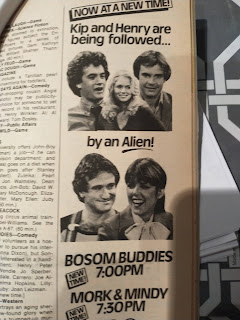 As we mentioned yesterday in our Show Notes for this week's bonus episode, the attempted assasination of Ronald Reagan earlier in the week had caused pre-emptions. One of them was this scheduled episode of Mork, and you can see why when you see the capsule: 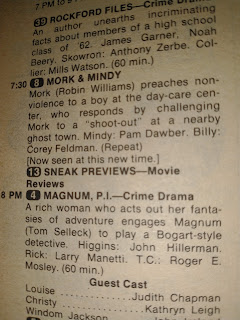 Remember that this is a Dallas/Fort-Worth edition, and so the times are Central.  You can see here that CBS had a cool-sounding episode of Magnum leading in to that Nurse premiere. Preceding that, on The Waltons, John-Boy is promised a job at the university "if he can create a television department." I want to see that one!

NBC had a two-hour Flamingo Road after the circus special. ABC followed its leadoff comedies with Barney Miller, Taxi, and a 20/20 with Geraldo Rivera reporting on terrorism from the Middle East.

Elsewhere on the dial, the PBS affiliate, channel 13, had Sneak Previews, Paper Chase, and a National Geographic spotlighting the National Parks. Outside prime time, independent station channel 39 had a Wonder Woman rerun with Joan Van Ark and Ted Shackelford! At the same time on channel 21, Yvonne Craig guested on The Wild Wild West.

Email ThisBlogThis!Share to TwitterShare to FacebookShare to Pinterest
Labels: This Day in TV History, TV Guide