1) The Master: I enjoyed talking about this 1984 ninja show on the podcast this week, but as I mentioned in our Facebook group, I am afraid that we risk reprisal for breaking our sacred oaths by revealing the ways of the series in public.

2) MTV: 40 years ago today, the channel known for reality shows and--wait, wait, wait. No, we're not gonna do this. When MTV premiered, it was awesome, and we loved it. Let's celebrate what it was and not bemoan what it is.

3) Sonny and Cher: Their first variety show premiered on this day 50 years ago tonight! I imagine that 49 years and 364 days ago, they were already sick of each other.

4) Lee Van Cleef: If there's one thing this past week taught me, it's that this dude did a lot more commercials than I remembered.

5) TVP: That's Timothy Van Patten to the non-believers out there. OK, so we weren't totally sold on his character's way with the ladies. Or with his martial arts abilities. Or with the general portrayal of the Max character. Or--uh, did we mention TVP is a very successful director?

6) Ahmad Rashad: GSN created a new game show, Tug of Words, which Rashad will host. If the questions are as difficult as the ones he posed to Jordan in the Nineties...then there are gonna be a LOT of winners.

7) Tempestt Bledsoe: Happy birthday to the former star of that show with that guy!

8) National Sandwich Month: Step into August into style by devouring a giant sammich. 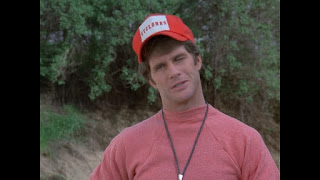