40 years ago tonight, NBC premiered the TV movie Born to Be Sold with Lynda Carter, and, though I don't mean any disrespect to the somber subject matter, each time I see the title I think of Born to Be Wild or I read it as Born to Be Bad, and I think of Lynda Carter in bad-ass motorcycle gear, and I...Where was I, again?
In reality, Carter was fresh off her stint on Wonder Woman and played a crusading social worker trying to bust up a baby-selling ring. The cast features Harold Gould, Dean Stockwell, Ed Nelson, Lloyd Haynes, Philip Sterling, and Sharon Farrell.
This vintage TV Guide ad is all over the web. The movie itself is easy to find online. 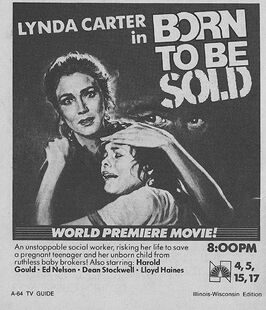 Note that is central time in the ad. NBC preceded the movie with a new Little House on the Prairie.
ABC offered a new That's Incredible! including an 8-year-old fiddler. Is that really incredible? The Vikings and Broncos followed on Monday Night Football.
CBS' lineup consisted of Private Benjamin and The Two of Us, then MASH, the third-season premiere of House Calls (surprising it had 3 seasons and 57 episodes), and the fifth-season premiere of Lou Grant.
Posted by Rick Brooks at 6:00 AM

Email ThisBlogThis!Share to TwitterShare to FacebookShare to Pinterest
Labels: This Day in TV History, TV Movies