1) Battlestar Galactica: With me getting the game and also reading a book about the series, could this show be gaining momentum heading into Batty season? 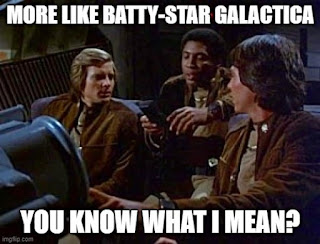 2) MASH: I read on Sitcoms Online that ME-TV is replacing Columbo on Sunday nights in part with MASH. It's great that a national outlet is willing to take a chance and give more exposure to such an underseen little gem.

3) Love Boat cruise: If this doesn't get people back to cruises, what will?

4) COZI CONDENSED BOLD: The hottest show in reruns stays in the Top Ten because it's still featured on the Cozi homepage.

5) Riptide: Decades is running a marathon this weekend. Man, I think this is shown even less than MASH.

7) [SPOILER] shot J.R.: The nation learned the identity of J.R. Ewing's would-be killer on this date in 1980. The Dallas installment beat The Fugitive finale to become the highest-rated television episode of all time, lasting as such until the finale of that obscure, rare comedy MASH.

8) Tweety: A Tale of Two Kitties, released November 21, 1942, features the first appearance of Tweety Bird, so we can celebrate his 80th birthday today. I STILL want Sylvester to destroy him, though.

9) National Stuffing Day: Personally I think it's one of the most disgusting Thanksgiving foods, and I was bombarded with commercials for it all year round: