1) The Fonz: Henry Winkler is auctioning off one of the iconic jackets his Happy Days character wore. Wait, isn't there one at the Smithsonian, at least one other that was auctioned before...How many of these danged things are there?

2) Daylight Savings Time: We'd never be so trite as to suggest you spend the extra hour listening to one of our past episodes.

Why don't you go for the bonus episodes so you can listen to TWO of them?

3) Crazy Like a Fox: Crackle added a batch of the series for November, but although all are labeled "Season 1," it's a mix of episodes from both seasons in no apparent order whatsoever. How can new fans appreciate the show if they can't follow the intricate continuity from the beginning?

(For the record, I mocked this show when it was on and never watched it, but Adult Rick thinks, hey, Jack Warden? I should give this one a shot.)

4) ESPN Classic: ESPN is now finally pulling the plug in an official way after letting the once-great channel die for over a decade. Bring back Classic Sports Network!

5) Michael Sloan: He has a new book from Bear Manor Media about a revival of Kung Fu, so naturally we ask, where's the book on The Master?

6) Welcome Back Kotter: My wife and I went to a toy show yesterday, and somehow one of the most represented BOTNS-era programs was WBK. For example, someone had these: 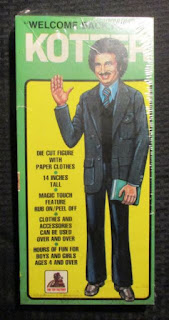 7) Bob Hope: 50 years ago tonight, NBC aired the comedian's latest special, which co-starred Jack Benny, the Osmonds, and John Wayne. Wayne appeared in an All in the Family spoof!

8) 12 Angry Men: Reginald Rose and the Journey of 12 Angry Men by Phil Rosenzweig, a new book spotlighted on the TV Confidential podcast, talks about this seminal work. Mike, this is a clear sign we should continue our longtime bit of creating new juries with various themes!

9) George Wendt and John Ratzenberger: One of my favorite YouTube uploads of the week is this compilation of their segments cohosting a 1985 episode of Friday night Videos:

10) R.I.P. William Lucking: He has prominent roles in two episodes we talked about on the show: Voyagers (as Babe Ruth!) and The A-Team.