1) Dean Martin Celebrity Roasts: The new TCM documentary King of Cool does a fine job covering Dean's lengthy career, but it gives scant mention to the roasts. To compensate, you can listen to our podcast on the subject. 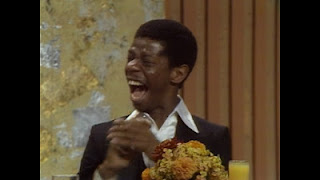 3) Knight Rider: Check this out, on the way from Super 7. It's an action figure for those who know the real star of the show was not the car, but the Hoff.

4) Alan King's Thanksgiving Special: This premiered November 25, 1980, and was just uploaded by Fuzzy Memories. It's slow going for a while despite BOTNS fave DVP, but the last full segment, in which King mocks the Fall TV lineup, is great.

6) Earth II: The ABC TV movie premiered this night in 1971, confusing half the country who thought they had missed Earth I and the other half who thought it was about the Justice Society of America.

8) Automan: I haven't yet heard the Retroist's new podcast devoted to the show, but I am betting he doesn't do a deep dive into the Laura Branigan show like we did!

9) Soul Train: The record for the longest Soul Train line was broken last week. Just when we think humanity has reached physical performance, courageous individuals like these come along and push our species beyond its assumed limitations.

10) Ahmad proposes to Phylicia: Today is the 35th anniversary of the most romantic moment in the history of...NBC's pro football coverage: