Inside the Guide: Spider-Man and His Amazing Friends premieres in September 1981

Our podcast subject this week, Spider-Man and His Amazing Friends, premiered September 12, 1981, and that just happened to be the week of the TV Guide Fall preview issue. So we have a few references to the show in the magazine, but with an odd twist.
First up, in the Daytime section, the Guide mentions the newcomer and lists Spidey's friends as Iceman and "Fire-Star." 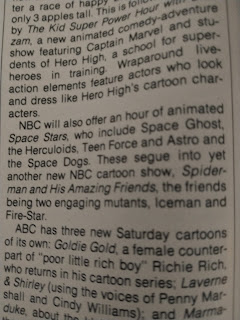 In the actual listings, though, we see her named...Heatwave? 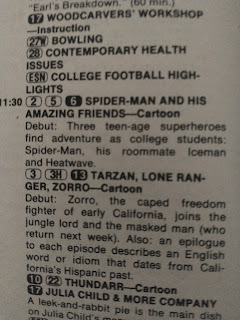 Who the heck is Heatwave? And what about that extra hyphen in "Fire-Star"?
We know, of course, that the character's name is FIRESTAR, and I will prove it to you by showing you the display ad NBC paid for to showcase its Saturday morning lineup.
Wait, I can't do that. NBC DID NOT buy an ad in this issue to showcase its Saturday morning lineup!
I tell you, this is a real letdown. ABC and CBS come through, even though CBS' ad is actually in the Friday section of the mag, which is a bit confusing because that's the end of the mag. That in itself is odd because it's not like the shows debuted a week late; the likes of Blackstar and Trollkins already premiered the previous Saturday along with most of the new ABC and NBC shows.
I won't leave you hanging! Here are the ABC and CBS ads: 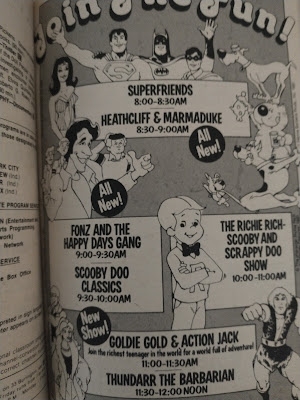 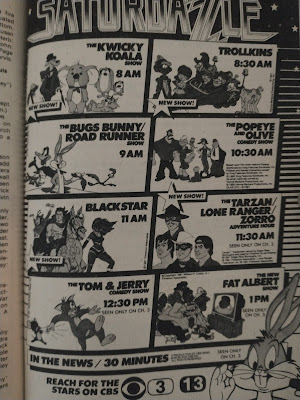 Email ThisBlogThis!Share to TwitterShare to FacebookShare to Pinterest
Labels: Cartoons, Inside the Guide, Spider-Man, Spider-Man and His Amazing Friends, TV Guide