*Thanks again to friend of the show James and his daughter Lucille for suggesting this week's podcast!

*Our video playlist for this episode, featuring theme songs, toy ads, Stan Lee on CBC, and James Mason for Thunderbird wine, is below!

Remember to visit our official YouTube channel anytime for all of our past podcasts and episode-specific playlists for each one!

*Before we get into the episode, I want to mention 3 things I LOVE about the cartoon that we somehow didn't mention on the pod.

1) This logo that begins each episode:

2) The incredible (but not Hulkish) theme song, including the stellar shot of the trio running to the camera: 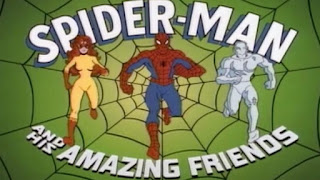 *The 1981 Spider-Man series we mention (with mucho Dr. Doom-o) aired in first-run syndication. Here's a decent summary of the differences and similarities! It premiered the same day as Friends as part of a package that included the 1960s Spidey-toons. I wasn't able to find a listing for the show on September 12, 1981 (the debut of both), but it must have aired somewhere! I remember seeing the 1960s ones but not this one.

*Here is a pic of the Treasury Edition I mention that features Dr. Doom and is cover-dated July 1981: 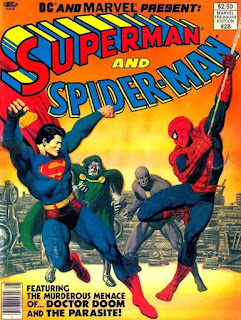 *We give props again to Dan Gilvezan, who we both credit as being "our" Spidey voice of the era based on his work on this show. Due credit as well to Kathy Garver and Frank Welker, the other Spider Friends.

*Ka-zar appears in an episode of the Spider-Man cartoon co-starring Kraven.

*"The Quest of the Red Skull," the final Season 1 episode, is the one missing from Disney Plus.

*For the record, I like this version of Iceman!

*Laurie showed her Crack Research Team-worthy credentials by doing some digging on Ms. Lion, discovering the lovable canine is a Lhasa Apso. Sorry we don't feature Ms. Lion more on the podcast, but she isn't featured in the episode!

*Here is a website devoted to the series and packed with lots of info.

*Spider Friends, GO FOR IT!