1) Ebert and Siskel: We had a lot of fun celebrating the impressive television legacy of the two legendary film critics on the podcast this week. I gotta say, though, I really, really disagree with them on this:

It's something else when Roger starts a review by saying he never found Steve Martin funny!

2) Judith Crist: Not only did author Jerry Roberts call her the first mainstream national TV critic, today she would have celebrated her 100th birthday! Of course she was a longtime critic for TV Guide: 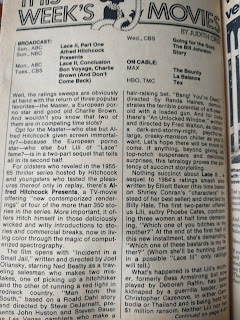 3) Aaaand the rest...: We also salute the many critics who tried to get in on that Siskel/Ebert train, especially Bill Harris, who just seemed like a nice guy; and Rex Reed, who...didn't, but we didn't get to talk much about him.

4) Summertime: Mike and I have long maintained that Emotional Summer (TM) began Memorial Day, but the Eastern USA is experiencing a big heat wave this weekend, and I think when it's 96 and humid, it feels like Summer.

5) Lionel Richie: The soon-to-be Rock Hall of Famer just won the Gershwin Prize. Unfortunately, this puts him no closer to a BEGOT, as he already had a Grammy and still needs a Batty, an Emmy, and a Tony.

6) The Beatrice Arthur Special: I really should write more about this sometime, but I think I need a few more...months to process it:

Actually, it's not bad for what it is, and it's really quite typical of the then-fading variety format. Madame steals the show, and a bizarre "poignant" sketch with Rock Hudson is a highlight of sorts.

7) I've Had It Up to Here: 40 years ago tonight, this Dick-Clark-produced special, hosted by Steve Allen, joked about the foibles of everyday life and its concerns. And of course it invented about 20 comedy bits.

10) The Networks: Hey, remember when we used to get excited about the new Fall shows coming to the good old-fashioned Big 3 networks? This week's upfronts kind of glossed over CBS, ABC, and NBC proper. It makes me nostalgic for this: 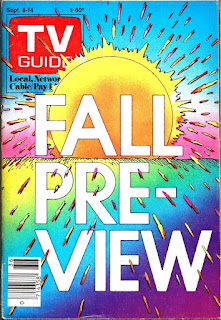 Then again, eating an ice cream sandwich is enough to make me nostalgic for a Fall preview issue.