1) Jane Pauley: Don't want to give away the subject of the Fame Game in this week's bonus episode, but Jane has a connection.

2) National Chocolate Chip Cookie Day: If there's one thing this country needs, it's another day to have an excuse to eat sweets. I mean, Easter was a few whole weeks ago!

3) Long Train Runnin' : Our Story of the Doobie Brothers: Do they talk about the turkey episode? 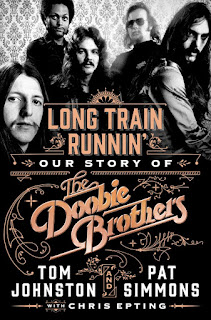 4) The A-Team and The Six Million Dollar Man: B.A. and company are joining Steve Austin as recent Universal TV show stars coming to Blu-Ray. Magnum and Incredible Hulk got recent releases, too. Can B.J. and the Bear be next?

5) Nicholas Hammond: Happy birthday to the star of the 1970s Amazing Spider-Man. Talk about something I'd like to see on disc! Shout! teased this as a possibility when announcing its recent Dr. Strange limited edition, so maybe it has a chance.

6) The Waltons: Decades has a marathon this weekend, just in time to celebrate the news that The CW is running another "modern" movie of the franchise later this year.

7) George Brett: Happy birthday to the Royals legend and Hall of Famer!

8) The FBI: As 3 of the new Dick Wolf FBI series just earned renewals from CBS, let's take a moment to acknowledge the Quinn Martin joint that ran from 1965-1974!

9) Leonard Maltin: He recently received the Robert Osbourne Award at the TCM Classic Film Festival. His speech was humorous and friendly, with the warmth and the Warren Beatty cameo overcoming the unimaginative direction. I give it...a 7. (Note: full clip below is 20 minutes)

10) Fred Ward: R.I.P. He was primarily a film actor, but he has some interesting TV credits on his resume, like an uncredited role on a Quincy, several shots on Incredible Hulk, and some TV movies.