Shows with Asian-American stars I'd like to see streaming--REDUX

Last year, to celebrate Asian-American Pacific Islander Month, I took a quick look at 10 BOTNS-era series that featured Asian Americans and that I wouldn't mind see come to a streaming video on demand (SVOD) service. Today I follow up and see if any made it or seem closer to arrival!
I have pasted my original list below and put my new comments in beautiful blue underneath each item.  Here we go:

This one is much more difficult because of the lack of Asians on television in the 1970s and 1980s.  So to get a respectable list, I cheated and focused on shows that aren't streaming--some of these are on DVD--and ones that featured Asian-Americans in the supporting cast, not just leads. If I am missing some worthy efforts of the 1970s and 1980s--and I know I am--please add your own suggestions in the comments.

1) Mr. T and Tina: Notorious Pat Morita flop from the creator of Welcome Back, Kotter that only lasted 5 episodes but has some historical value for the Asian-American casting. Poor Morita left Happy Days for this.

UPDATE: No way, but at least I have One-Armed Pat Morita on my desk if not his old sitcom: 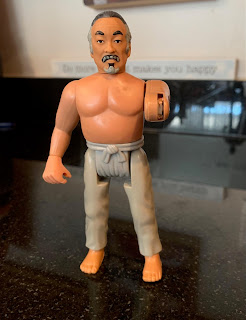 2) Ohara: Speaking of Pat Morita, this short-lived police procedural (1987-1988; I am actually surprised it made it to 30 episodes) is worth a spot on this list for this alone:

UPDATE: You know, i could actually see this happening IF Warner 1) still had Warner Archive Instant 2) was doing anything with its older TV shows.

UPDATE: Well, we got to watch the promo again! Owned by Disney, which has little interest in deep catalog material.

4) The Amazing Chan Clan: It's not high art, but it could at least be thrown up on Boomerang. Keye Luke plays Chan in this incarnation of the famous detective.

UPDATE: Boomerang is still around for some reason but almost never adds anything, so it seems highly unlikely, but at least it's on DVD.

5) Longstreet: It's a reach, but this series featuring James Franciscus as a blind investigator has cult status in part because it features Bruce Lee in a handful of episodes. Shouldn't anything with Bruce Lee be available?

UPDATE: Again, you would think Bruce Lee would be seen as a draw. Maybe, just maybe, Paramount would license it out to Tubi or someone like that since it has no interest in putting short-lived programs on its own streamer.

6) Quincy M.E.: Shoutout to Quince's awesome right-hand man Sam Fujiyama. I have been yearning to see this one on streaming video on demand pretty much ever since Netflix dropped all its Universal catalog shows years ago.

UPDATE: I have no idea why this remains on the shelf, but maybe Peacock will trot it out eventually.

UPDATE: HEY! We got one! Tour of Duty made it to Crackle last year, and all 3 seasons are still available as of this writing.

9) Kung Fu: It was on Prime Video for a very short time, but now is MIA despite a relatively high-profile reboot running on CW. Seems like a natural for HBO Max. And, yes, David Carradine was the lead, but the show also starred Keye Luke.

UPDATE: You would think the ongoing reboot, which was just renewed, would give impetus to do something with this one, but it hasn't been anywhere since it got the quick hook from Prime. This seems like one you could see showing up on FreeVee any day.

10) The Courtship of Eddie's Father: Miyoshi Umeki played the Corbetts' housekeeper in this gentle family sitcom (another James Komack show) which aired on the gone-but-not-forgotten Warner Archive Instant.

UPDATE: Yep, if Warner Instant were around...No buzz or signs of life on this one, but I could see Tubi licensing it at some point.
Posted by Rick Brooks at 6:00 AM