*The video playlist for this week's podcast, featuring the episode we discuss, is available below! The very first PBS version of Siskel and Ebert is there as well. You will also find talk show appearances, promos, trailers, and more!
Note that this one contains more full episodes than usual (including the very first Siskel and Ebert show on PBS, the two "They'll Do It Every Time" episodes, and the full Entertainment Tonight we mention near the end), so it's a bit longer than most.
And remember you can also visit our official YouTube channel for all of our past episodes.
*This episode of Siskel and Ebert premiered Saturday, June 24, 1989 in most markets. Other syndicated programs airing in syndication that day include Charles in Charge, Superboy, Star Trek: The Next Generation, Learning the Ropes, It's a Living, and Tales from the Darkside! And don't forget...Sneak Previews!
*Their movie review program began as the monthly Opening Soon at a Theater Near You on Chicago PBS station WTTW in 1975. In 1977, it became Sneak Previews, a weekly program syndicated on member stations across the country. Then they left PBS and signed a deal with Tribune to make the syndicated At the Movies in 1982. In 1986, they jumped to Buena Vista (Disney) to create Siskel and Ebert & the Movies, but by 1989, the show was called Siskel &Ebert. It continued until Gene Siskel's death in 1999, and Ebert continued the franchise with guest hosts until his own death in 2013.
*Enemies: A Love Story is available from Amazon as a Kindle Single.
*The book I mention by Jerry Roberts is called The Complete History of American Film Criticism.
*"They'll Do it Every Time," created by Jimmy Hatlo, was a syndicated daily comic panel that ran 1929-2008 (image below taken from ebay). 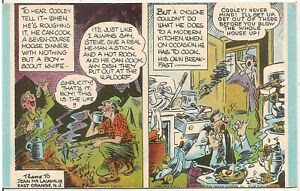 *Comics Scene was published 1982-1983 by the makers of Starlog and was revived for another go from 1987-1996. A few more issues came out in 2000.
*Batman premiered June 23, 1989 and had a $40 million opening weekend on its way to grossing well over $251 million ($400 million worldwide) at the box office. The Tim Burton film stars Michael Keaton, Jack Nicholson, and Kim Basinger.
*Honey, I Shrunk the Kids premiered at the same time as and finished behind Batman with a $14 million opening weekend on the way to $130 million domestic. That first weekend was Disney's biggest ever up to that point.
*Ghostbusters 2's debut was June 16, 1989, and it opened to over $29 million on the way to a domestic total of $112.5 million--far less than the original despite that opener exceeding that of the first movie.
*Agnes Varda's Kung Fu Master (not to be confused with the 1980s arcade game, though it features prominently in the film) had a French release a year before Gene and Roger showcased it on their program. The New York Times review from this weekend is titled, "She's 40. He's 15. Hmmm."
*Eddie and the Cruisers II bombed when it debuted in 1989.
*Here is where you can find the Gene and Roger podcast.
Posted by Rick Brooks at 6:01 AM