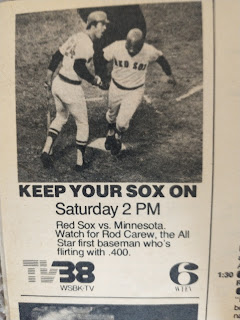 This is a New England edition, so it's no surprise see the Sawx on TV-38. Carew ended up hitting .388 and winning the American league MVP, but his Twins finished well back of the Royals. In the AL East, the Yankees won the division by 2.5 games over the Red Sox and Orioles. 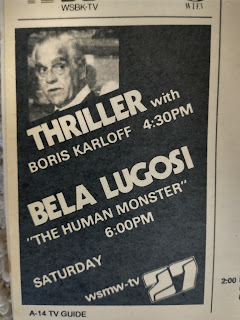 I like this ad showcasing some of the programming on independent channel 27.  There's lots of cool horror on TV this Saturday; over on channel 5 you could see 1942's Night Monster with Bela Lugosi at 3:30. What this ad does not say is that the Thriller episode of the anthology series  is "The Premature Burial," a Poe adaptation starring Karloff himself.
You may wonder, isn't Thriller an hour show? Why, yes, it is/ What, then, does 27 have at 5:30, after Karloff and Lugosi?
Try Storch and Tucker! 5:30 is an F Troop rerun. I guess that wouldn't really fit in with the theme of that ad. Ghost Busters, maybe, but not F Troop!
Posted by Rick Brooks at 10:27 AM

Email ThisBlogThis!Share to TwitterShare to FacebookShare to Pinterest
Labels: Inside the Guide, TV Guide