*Thanks for joining us for another bonus episode in the middle of our season 10 and another installment of our popular TV Guide game! This week's game draws on this issue: 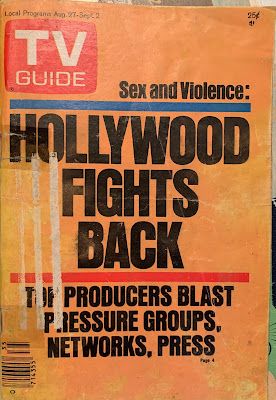 *Here is the video playlist for this week, including commercials, promos, music, and more!
And remember, you can always visit our official YouTube channel for our past podcasts and episode-specific playlists for each one!
*Tomorrow we'll share scans from the listing pages we used!
*Cyclamen is a type of colorful perennial flowering plant "traditionally sold in the winter."
*Crockett's Victory Garden was created by prolific gardening author James Underwood Crockett for Boston PBS station WGBH in 1975. Bob Thomson took over the renamed Victory Garden after Crockett's death, and the series ran continuously on PBS stations through 2010 and then in a couple of revivals.
*It's Tough to Be a Bird (1969) won an Oscar in 1970 for Best Animated Short, and then it premiered on TV in 1970.
*The short on Americana, Number Our Days, is Lynne Litman's documentary short based on the work of author Barbara Myerhoff. The film had won an Oscar for Best Documentary Short at the 1977 Academy Awards. You can see a short clip of the film and Littman's acceptance speech in the playlist!
*The People's Command Performance was an annual event on CBS. This particular showing was a repeat. Unfortunately, I couldn't find anything on YT for the 1977 version, but there is a 1978 promo in the playlist.
*Dickens of London premiered in 1976 in the UK as a Yorkshire production before airing in the USA on PBS.
*McCloud's vampire episode is "McCloud Meets Dracula" from its seventh season.
*For more on A Year at the Top, click here!
*Michael DeLano appeared in 11 episodes of Rhoda as lounge singer Johnny Venture!
*Again, thanks to our Facebook group members for voting for 1977. Don't worry, 1982 fans, we'll be doing a game from that year soon, too, but next week we're back to a regular episode!
Posted by Rick Brooks at 6:00 AM