Inside the Guide: Inside Chad Everett's Marriage

Yesterday we concluded our epic look at a week of listings from TV Guide exactly 50 years ago, but what of the other material inside? As we all know, the Guide is more than just those precious listings. In fact, there is an interesting cover story in this one. 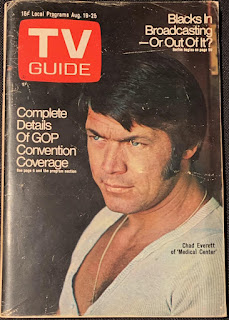 Before this magazine appeared, Everett had his notorious appearance on The Dick Cavett show, where fellow guest Lily Tomlin walked off in protest of his remarks. Take a look:

The TV Guide article is all about Everett's marriage (it's great) and his views on women's lib (he prefers traditional marriage roles--he has never changed a diaper--but is sympathetic to some of the concerns). The piece is well written, but Everett's views would raise eyebrows today. For example, he is against test tube babies and...day care! He says of the latter, "I think part of the doctrine of Communist philosophy is to destroy morals and break down the family unit." His wife Shelby disagrees on that one, saying there isn't anything wrong with kids having a place to play with other kids, but she has no complaints in the story.

Chad and Shelby did stay married until her passing!

Email ThisBlogThis!Share to TwitterShare to FacebookShare to Pinterest
Labels: Inside the Guide, TV Guide