1) Bosom Buddies: Come for the wacky premise of two guys dressing as women to stay in an affordable NYC hotel, stay for the chemistry between the two likable leads and the exploration of their friendship. Uh, I mean the sitcom itself, not our podcast.

2) Peter Scolari and Tom Hanks: I just like the idea of listing him first for a change!

3) Telma Hopkins: The episodes of Bosom Buddies that seemed built around showcasing her singing irked me, I will admit, but she is an obvious major talent, and probably better this than Gimme a Break! or Family Matters.

4) Leonard Maltin: This great YouTube channel is posting a vintage Entertainment Tonight Maltin review just about every day, and I am loving it! I enjoy Maltin's palpable disappointment when a movie doesn't work for him. It's like you haven't angered him, you have disappointed him, and somehow that seems worse.

5) American Family Day: The first Sunday in August celebrates family time together, and what better way to observe this than to spend the afternoon watching another family that is on television?

6) Alexei Sayle: Happy 70th birthday to the British comedian who so weirded me out on The Young Ones.

7) The Game and Its Glory: 40 years ago tonight, NBC broadcast this affectionate look at the Baseball Hall of Fame, hosted by Donald Sutherland! An incomplete version is on YT:

8) Sanford and Son: The LP: This showed up the old TV Guide we talked about earlier this week: 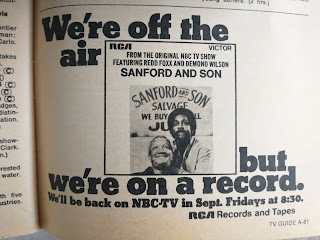 The 1972 RCA release looks like a cash-in, all right. In addition to the awesome "Street Beater" theme song by Quincy Jones, it consists of 11 dialogue segments from the show according to this site. The total running time of the LP is about 37 minutes.

9) John Travolta: A Honus Wagner baseball card sold for $7.25 million. As I said in our official Facebook group, I am having this card appraised: 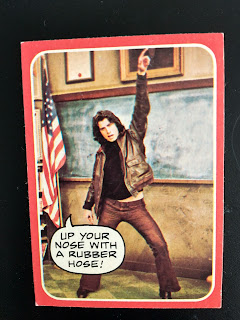 10) R.I.P. Bill Russell, Nichelle Nichols, Pat Carroll: Another tough week for losses. Russell wasn't just a Hall of Famer basketballer; he was a CBS announcer for years and appeared in one of my favorite old sketches on the original SNL. That isn't on YouTube, though, so here he is in Miami Vice. And also in this clip is another famous performer: Bernard King! Oh, and Harvey Fierstein, too.