This Day in TV History: 50 years ago tonight (Thursday, August 24) in TV Guide

With the RNC coverage behind us, it's back to entertainment programming in prime time tonight. At least, that's the goal! Let's see what's scheduled in the Los Angeles area for the night of Thursday, August 24, 1972 according to TV Guide. The region is back in sync with the majority of the country now without the live event programming. 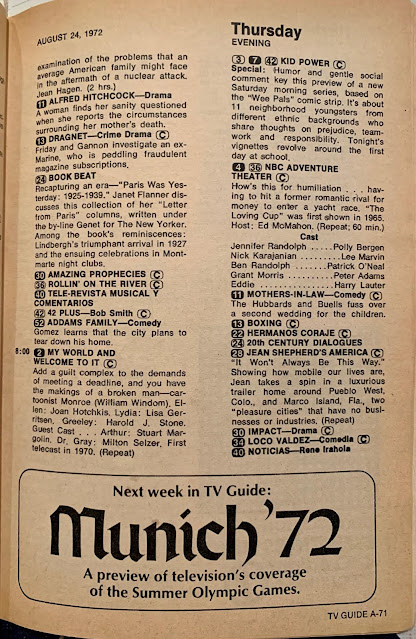 I'm already interested in the 8:00 offerings: a rerun of My World and Welcome to It, a 1965 rerun with Lee Marvin (and hosted by BOTNS star Ed McMahon!), and Kid Power.
The latter is a Rankin-Bass animated series, one that Wesley Hyatt calls "well meaning" in his Encyclopedia of Daytime Television. It aired Saturdays on ABC at 11:30 for one season, then in reruns on Sundays for another season. Allan Melvin is in the voice cast.
You certainly can't accuse that opening of being unclear about the premise of the series! 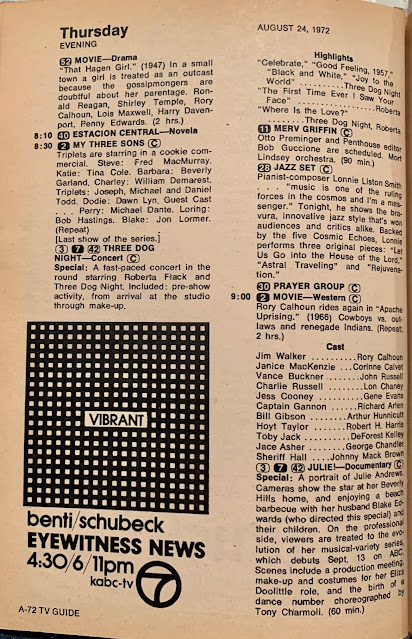 At 8:30, it's the end of an era with the final broadcast of My Three Sons of its 12-season run on network TV (ABC and then CBS). On ABC, are you ready to ROCK with Three Dog Night? For, uh, 30 minutes? Why bother with footage of the band applying makeup, of all things, when you only have 25 minutes without ads? There must be, what, 5 or 6 songs tops on this "concert special."
A new Julie Andrews special stands out at 9:00. CBS' movie of the night is Apache Uprising with Rory Calhoun. 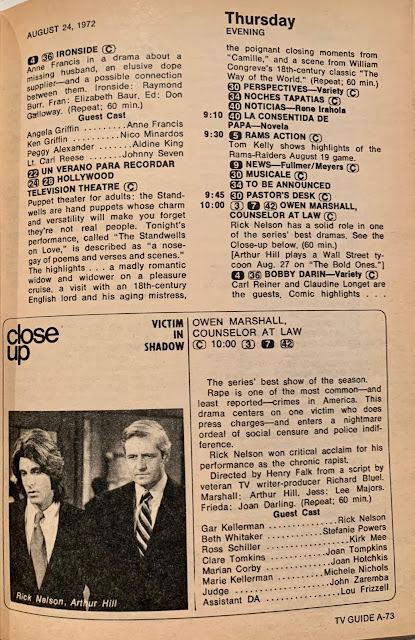 Later, it's Ironside and Owen Marshall and Bobby Darin--something for everyone? The Guide sure seems high on that Owen Marshall:
Posted by Rick Brooks at 6:00 AM