This Day in TV History: 50 years ago tonight (Wednesday, August 23) in TV Guide

50 years ago today, the primetime scene was even more barren (outside of ongoing Republican National Convention coverage) than the previous couple nights. Of the major networks, only ABC offered anything else nationally--the short-lived comedy combo of The Super and The Corner Bar at 8:00.
Of course, we have a Los Angeles edition of the Guide, and the live coverage ended "early" out there, so let's see what this metro area got Wednesday, August 23, 1972: 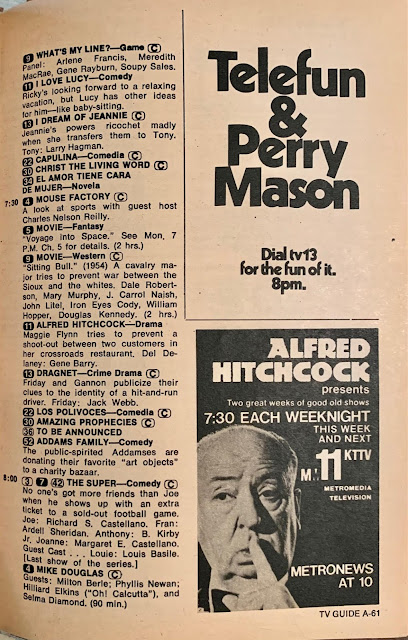 In addition to the finale of The Super (not quite esteemed on the level of the final MASH) and the NBC channel getting that Mike Douglas Show in again (Mike Douglas = the most powerful man in television in 1972, and don't dare totally pre-empt his show), we see the return of the Telefun and Hitch ads. Channel 11 sure is proud of its two whole weeks of AHP! 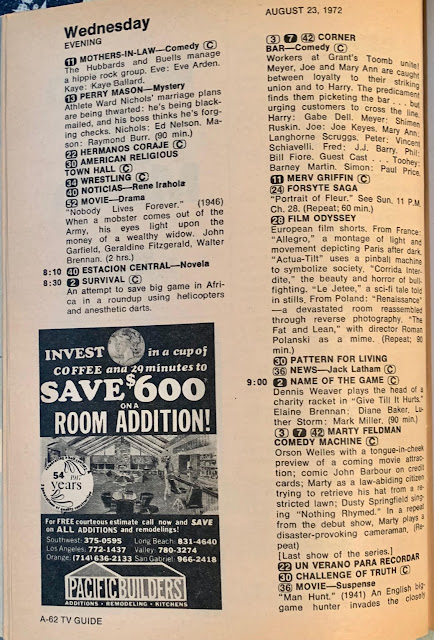 Another series finale here with The Marty Feldman Comedy Machine. Note that the film shorts collection on 28 is what Judith Crist calls "the one goody" of the week in her movies column this week. She says the shorts here are "brilliant and wisely selected." Well, yeah, Judith, but Barney Martin's on Corner Bar! 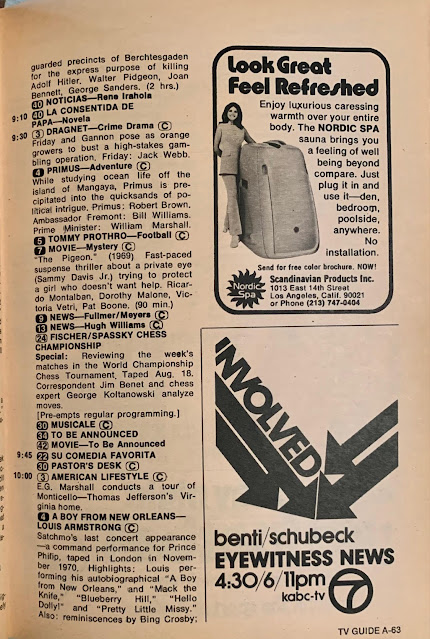 NBC brings Primus and a Louis Armstrong special. None of this aired tonight in the other time time zones.
American Lifestyle interests me. The half-hour syndicated show lasted for one season and 24 episodes according to IMDB and featured E.G. Marshall visiting and discussing homes of famous Americans. I wouldn't mind seeing some of those episodes!
To get a little video in this post, here's a clip of Tommy Prothro, former head coach at UCLA and, at this time when he has his own show on channel 5, coach of the L.A. Rams. At least, here's his team and playcalling in action on Monday Night Football:
Posted by Rick Brooks at 6:00 AM