This Day in TV History: 50 years ago tonight (Tuesday, August 22) in TV Guide

Continuing our look at 50 years ago this week, we go to Tuesday, August 22, 1972. RNC coverage still dominates the networks, but there is a little bit more programming than last night even on the East Coast. We are examining a Los Angeles edition, so here we go to the West, where the live coverage is just about done by prime time:
At 7:30-8:00, networks are wrapping up political news coverage, but check out this Mod Squad repeat on ABC! Andy Griffith guest stars! 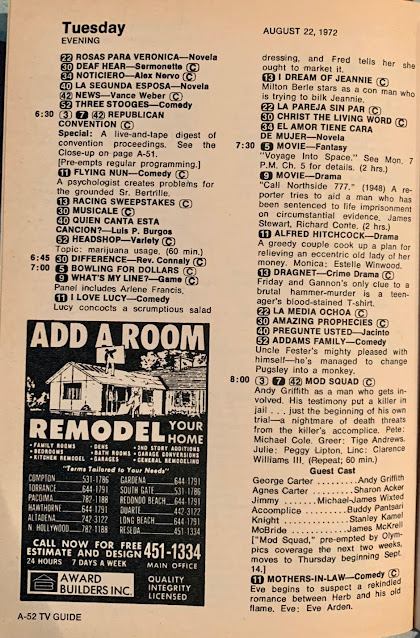 By the way, looking at Headshop on 52 at 6:30 above, where the topic is marijuana usage, isn't that likely the topic every episode? 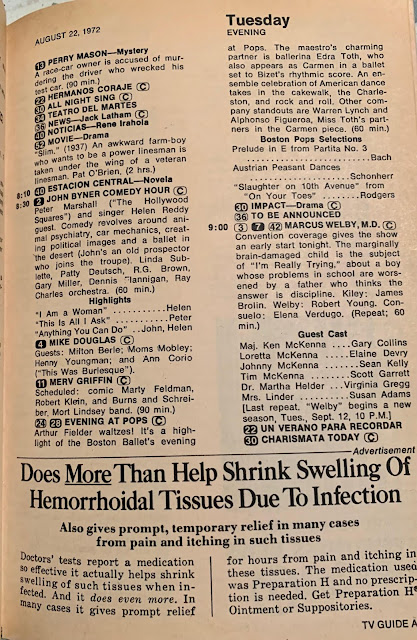 CBS begins entertainment programming with summer replacement series The John Byner Comedy Hour at 8:30, while the NBC affiliate, channel 4, brings a Mike Douglas episode (pre-empted earlier that day). At 9:00, it's a Marcus Welby on ABC.
And of course, you have to love the classy PBS program Evening at Pops leading readers right to a hemorrhoid cream ad. 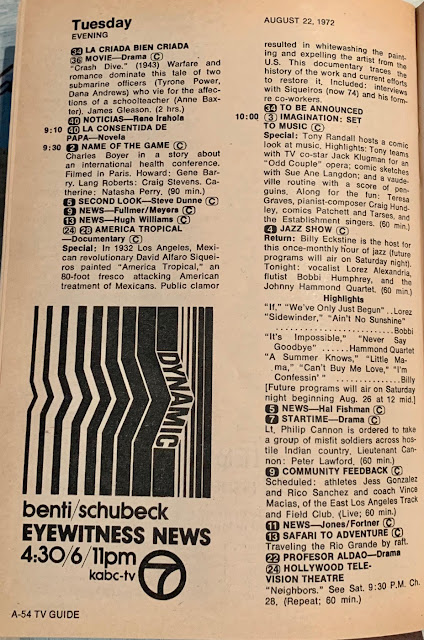 9:30 sees Name of the Game on CBS, a 90-minute show that takes us to the news. Jazz Show has a special presentation on NBC. There's a split on the ABC stations, with bigger channel 7 going with Startime as Santa Barbara's channel 3 gives us the program of the night as far as I'm concerned. I mean, we got Tony Randall and Jack Klugman in an Odd Couple opera!
Startime is interesting--a 1965 episode of The Bob Hope Chrysler Theatre anthology series but known as Universal Star Time in syndication. This originally aired October 6, 1965 on NBC.
Nationally, NBC showed Snoopy at the Ice Follies at 7:30, so maybe the West Coast missed out because they didn't want to show it at the "late" hour of 8:30.
This is a lackluster evening overall, so let's step back to one of my favorite listings of the day: Independent channel 13 with a Hey Landlord! showing (the only one of the week) at 2:00. The rest of the week in that slot, the station has a travel show, a talk show, Rocky and Friends, and  magazine show What Every Woman Wants to Know.
Posted by Rick Brooks at 6:00 AM